Pain Much, Lose Much 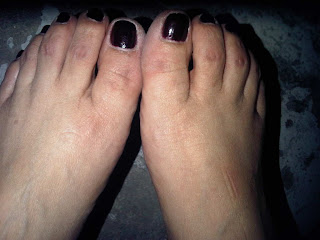 My quest for a fitter and of course thinner body is taking its toll on my toes. I am wallclimbing again after yearssss of overeating and not exercising.

I always thought I was one of the lucky few who never gain weight. Back in college, I almost flunked a PE class because I lost weight. I enrolled in Weight Training and chose weight gain for my program. Finals had the teacher weighing us and comparing our first- and last-day of class weights. I went from thin to skinny and my teacher threatened to fail me right there and then. Good thing she didn't. But oftentimes I wish I still had the 21 3/4-inch waist.

After giving birth to my second daughter, I resolved to lose weight and try to gain my pre-childbirth frame. Wallclimbing was the fad then. I was never athletic and would not have tried it had I not heard from a reporter how effective it was for weight loss. It wasn't easy. There was a time when I couldn't climb the stairs in the Malacanang Press Office because of stiff muscles. But eventually, I found myself working out three times a week. And in just two months, I had to overhaul my wardrobe. My pants were so loose that they fell even after I folded them twice over at the waist.

I wallclimbed for about two years (or was it three?) I stopped because work kept me and my buddies busy. And because wallclimbing is an extreme sport, it was difficult finding new buddies to climb with.

But recently, I was able to convince several friends to try it. And like it, they did. Still, our busy schedules are hard to reconcile. My goal for now is to be able to wallclimb at least once a week.

So why do my toes look like they've been run over by a truck with snow tires? I am a size 6 1/2. Sometimes 7. My rock shoes are size 4. I defied my instructor, who told me to buy a size 3 1/2. Rock shoes are meant to be smaller than your feet. My instructor said that if you can walk in them, then they're too big. Whenever I wear them, I feel like a Chinese girl in metal shoes. Imagine what torture my toes go through when I'm actually on the wall.